Forget the hype. I don’t want to wax philosophical on the troubling societal implications of Snuggie’s ascendancy to national renown. I’d just like to take a quick red-pen look at this magazine ad: 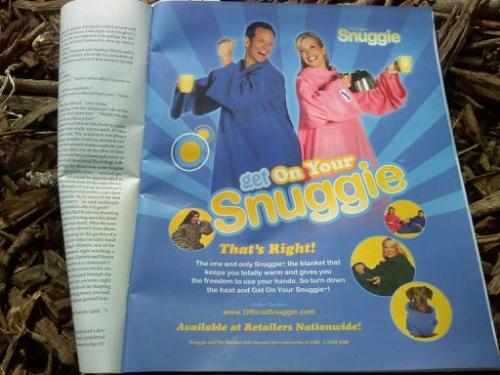 I’m confused. Is this, perhaps, meant to say “Get Your Snuggie On”? Shouldn’t it? I’m just sayin.

I mean, those people look like they’re getting their Snuggie(s) on, don’t they? (Whatever that means.) I guess it could just be telling the reader to put on his Snuggie like a mother telling a kid to put on his coat. Though my mom probably would have said, “get your coat on” rather than “get on your coat.” Maybe it’s an instruction to get onto your Snuggie. Sit on it. Mount it. Ew, I’m done with this line of reasoning.

So, is this clever, or just awkward? Well if that isn’t the crux of the Snuggie itself.

This entry was posted in Shoot the Messenger, Write and Wrong and tagged magazine ad, snuggie. Bookmark the permalink.

4 responses to “Keeps Your Hands Free to Pen Shoddy Copy!”