Saw U2 at Giants Stadium last night. Ahem, and the night before. Amazing show? Obviously. It’s U2. Bono is the ultimate showman (even if he can’t remember the words to his songs anymore) and the band’s as tight as ever (even if Larry Mullen Jr.’s starting to look a little tired). This was no question.

The stage was impressive, a transplantable theater in the round, surmounted by an enormous claw-like structure supporting a 360-degree jumbotron of the highest-resolution I’ve ever seen. Hilariously, Drum Master Mullen was quoted in the September issue of Spin as saying, in re the set up, “We don’t need another Pop Mart.” Yeah, this was much more tasteful and restrained than the giant lemon, sure. 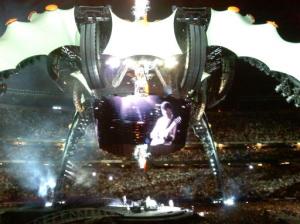 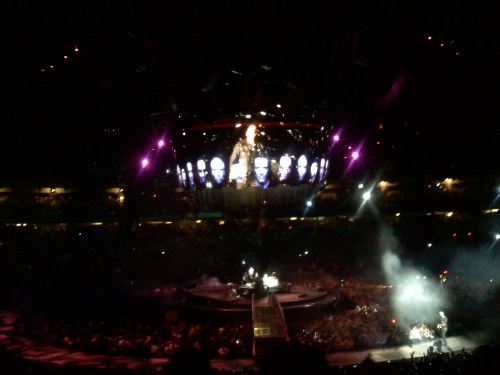 In the same brief article, Bono explains that on tour the band aims to let the latest technologies push their shows to new levels. And I will certainly give them that. The screen was good. It was real good. In fact, it was too good.

It felt for a lot of the show that the visuals weren’t just there to augment the performance, or supplement less-than-ideal fields of view. It felt instead, as though it was there to replace it. The image quality was outstanding. So clear that on the first night when it started to drizzle during Beautiful Day, I saw rain falling dramatically past Bono’s 40-foot onscreen visage before I even felt a drop. It was that clear. I could have been in my living room in front of a top of the line plasma flat screen (not that I have one). But that’s the problem: I could have been in my living room.

The cinematography, directed by Tom Krueger, was high caliber music video stuff that looked more like a big budget rockumentary than footage from a live concert. I didn’t shlep out to East Rutherford at rush hour to feel like I was at home watching a movie. And the thing was too big to be ignored. In the middle of the show, the screen’s panels separated and it stretched all the way down to just above the guys’ heads.

Concert going isn’t just about music, it’s about an experience. Getting there, finding your seat, stretching to see, being blown away by a tenement-sized PA. When I saw the Police at PNC Bank Arts Center last year I spent a half hour trying to score a patch of grassy real estate at an insanely over-sold show. When I did I planted myself on tip toe and balanced there for the remainder of the set. It was frustrating and borderline panic-inducing and thrillingly interactive, and when I caught a glimpse of the very top of Any Summers’s head it was a fucking revelation.

The concert experience has changed. The red lights of auto-focusing digicams precede the bursts of flash as pictures are taken. Cell phones stand in for bootleg recorders and cigarette lighters. And if you’ve got the cash — and an enormous claw exoskeleton, and a fleet of about two dozen semi trucks — for the world’s best simulcast screen, then who am I to stop you? But when I see live music I don’t want to be charmed or distracted by an idealized vision. I want to hear every note and every mistake, and rue my short stature, and stretch and strain to suck every sound and every image out of the rare opportunity to experience the music without my stereo or television. I want to know that I’m there. I don’t want perfect, I want real.