The World Wide Web is just brimming with useful information, neatly packaged in quickly digestible bite-sized morsels of information, tagged and labeled for easy finding with the superlatives we crave. In our fast-paced society you don’t just want a way to a trimmer tummy, you want the Fastest Way to Flatter Abs.

Strapped for cash? What’s the cheapest way to get to Mexico? (Try deportation.) Sexiest celebrities. Most extreme car chases. Man versus Beast. (OK, I got carried away. I just wanted an excuse to link to this. And this. And this!) Moral of the story, we want the best and we want it now. We also want the worst. 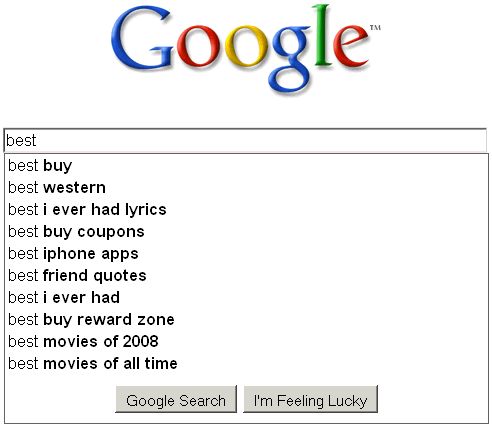 And what are they looking for when they search for the worst? 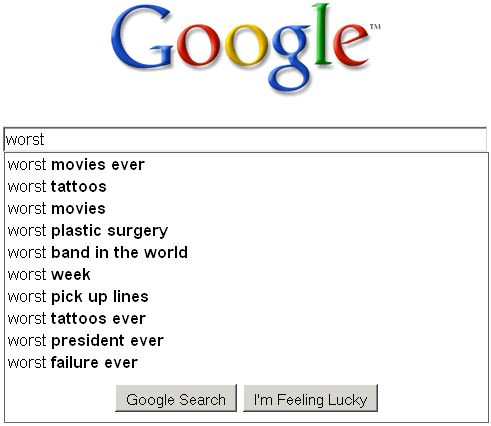 The answer, in a word: Schadenfreude. One could conceivably argue that finding a list of the lamest pick up lines could actually be useful, if only to amuse your friends by making a jackass of yourself. But the rest of these searches, it’s pretty clear, are just vehicles for reveling in the mistakes and misfortunes of others. Worst tattoos and plastic surgery? Pure Schadenfreude.

For a quick refresher on the word, a condensed summary from Avenue Q, by way of Broadway:

People taking pleasure in your pain!

What’s that, some kinda Nazi word?

Yup! It’s German for “happiness at the misfortune of others!”

“Happiness at the misfortune of others.” That is German!

Watching a vegetarian being told she just ate chicken

Or watching a frat boy realize just what he put his dick in!

Being on the elevator when somebody shouts “Hold the door!”

“Fuck you lady, that’s what stairs are for!”

Ooh, how about…
Straight-A students getting Bs?

The world needs people like you and me who’ve been knocked around by fate.
‘Cause when people see us, they don’t want to be us,
and that makes them feel great.

Sure!
We provide a vital service to society!

And speaking of service to society. Who, according to the Vox Cyberi, as aggregated by Google algorithms, is the worst band in the world? If you perform the search outright you’ll find this:

Tell me, Google, what do I think about that?