Recently, as I delighted over the sight of my brand new two-volume New Shorter Oxford English Dictionary stationed commandingly amongst the paperbacks and graphic novels on my bookshelf, I thought about how anachronistic a dictionary seems these days. Can you remember the last time you looked up a word in an actual, physical dictionary? (I can, but as we’ve well established I’m a severe dweeb.) Not that I don’t use the Web to look up words and synonyms; Merriam-Webster.com is one of the few buttons on my bookmark toolbar and it’s the quickest way, hands down.

So I figured, if I’m using online dictionaries and thesauri even while being nerdily enamored of the yellowed, brittle pages of my long-coverless Webster’s New World and the fragile leaves of my long-coveted OED, then most people probably go even more frequently, if not exclusively, to the Internet for definitions. And what are they most often looking up? To my surprise, when I typed “definition of” into Google, I found that people aren’t searching Cyberspace for mere meanings, they’re searching for Meaning. 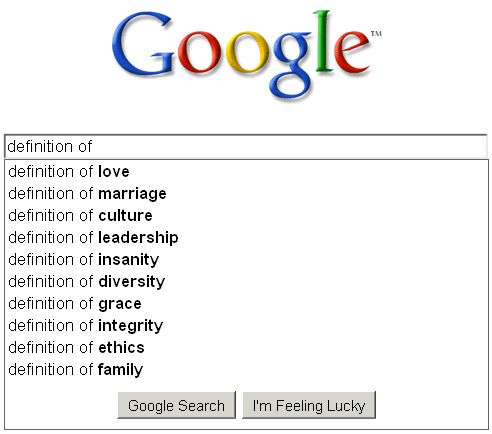 Of course, most of the results returned are dictionary and Wikipedia entries, with some goofy smiley-laden Yahoo! Answers discussions thrown in the mix. But meander down the first page of links for the definition of family and you’ll find an article from Libertarian think tank LibertarianNation.org.

The piece states that in a Libertarian “free society” people would define family for themselves, so that “[t]oday’s often dysfunctional biological family may be replaced by a functional nurturing family in which parental adults nurture and rear children that may or may not be biologically related to them, while the biological ‘parents’ pursue family relationships of another sort.”

That might seem cynical, but compare it to the author’s treatment of a current take on the subject, and it’s downright sentimental. An excerpt from the section called “The State’s Definition of Family” (emphasis added):

Since one of the state’s historic functions is accounting for numbers of people (the census), the state needs to be informed on the whereabouts and living arrangements of all people under its jurisdiction. One way to maintain accountability is to license and register couplings, cohabitations and procreations. Only licensed and registered couplings create a “legitimate” family. To protect its definition of family, the state enacts laws against fornication and adultery, insuring only licensed and registered couples cohabit and copulate, and discourages “illegitimate” births. Zoning codes prevent two unlicensed people from cohabiting as a “family,” prevent anyone other than a legally defined child or parent from cohabiting with a family, and prevent residential occupancy by non-traditional “families,” including fraternities and sororities. These and a host of other government-enacted and government-enforced laws and regulations insure the state’s ability to account for the physical location of people under its jurisdiction.

Throughout most of history, states sought to expand their populations by various means, including the procreation of its citizens. Marriage legalizes and legitimizes the offspring and creates a “family.” In many nations, and in many American states, the failure to procreate is grounds for divorce or annulment of the marriage and dissolution of the family.

In state-enacted marital and divorce law, the economic obligations among family members insure that children and women are prevented from becoming the financial responsibility of the state. Again, the needs of the state define family and family obligations.

Hear that, ladies? Quit being a burden on the State and settle down already. Ahem, legitimately, if you would.

For further reading from the brilliant minds suggested by Google, try:

Choice Quotation:  “Those persons…who have no legal capacity in point of intellect, to make a contract, cannot legally marry, as idiots, lunatics, and infants….[If a man] marries a woman whom he took to be chaste, and whom he finds of an opposite character, this does not invalidate the marriage….”
HM: “It gives the husband marital authority over the person of his wife. The wife acquires thereby the name of her husband, as they are considered as but one, of which he is the head.”

Choice Quotation: “As long as we believe that someone else has the power to make us happy then we are setting ourselves up to be victims.”

Warms the heart, don’t it? Maybe we shouldn’t be turning to machines for queries of this depth.