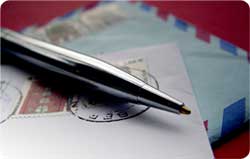 Remember chain letters? Real chain letters, the ones on paper that arrived in the mail. The ones you copied by hand and mailed, with postage, to 10 of your friends. And if you didn’t, you’d have years of bad luck. Seems like ages ago, doesn’t it? In fact, chain letters meant to bring luck have been traced back to the late 1800s, and their “Letters from Heaven” prayer-passing predecessors may have begun 100 years before that.

The 1980s, as some of us may remember, saw the start of the world record-seeking letters.

Hi this is a chain letter from a bunch of kids in Germany. They started it in 1975 and if it goes on till 1985 it will be in the guiness book of records it has not been broken yet So dont spoil it for them. Please copy this letter out six times and send it to six different people (Not the people below) and send a postcard to the first person on the list.

Apparently they were very popular in Germany…

This is a chain letter from Sil in Germany. It was started in 1986 if it goes through 1995 it will be in the Guiness Book of World Records (your name will be included) It has never been broken, so please don’t spoil it for everyone.

Of course, the Internet laid waste to that pedestrian tradition — and replaced it with an even more expediently (and immediately) annoying one, comprising the lamest of jokes, the drippiest of poems and, naturally, business propositions from Nigerian millionaires. Surprisingly, five paper chain letters were still in circulation between 2004 and 2008.

I’m neither the superstitious type, nor the type who oft overcomes laziness to copy and send out half a dozen notes, and as such I was never a big proponent of chain letters. And I certainly don’t miss them. But I do miss the way they reminded us how big the world is. An email from Australia is no more impressive than one from two cubicles over. A letter, on the other hand, posted from half a world away, literally has to travel half a world to get to you. Not one of those thousands of miles is virtual.

With the BlackBerries and the iPhones and the Internets, it’s as though the world’s billions are all within reach. It’d do us well to remember every now and again that we’re tiny specks on a big planet floating in space, and we’re not so close to each other as we think.