Google Game: Why won’t my…?

Am I tempted to take this set of results as an opportunity to soliloquize smugly on the fallibility of Apple? To point out the difference between omnipresence and omnipotence? You bet I am. But I won’t. Much. 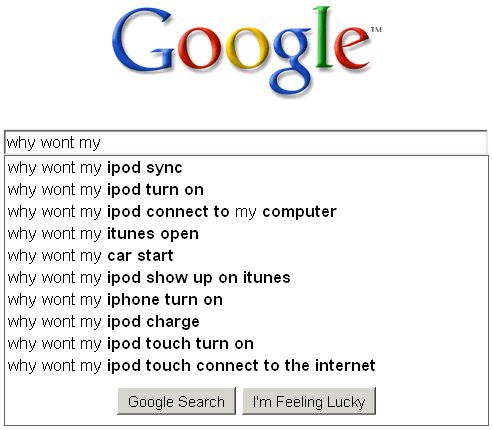 Considering that people are apparently inclined to turn to Google while sitting in a car that won’t turn over (presumably on their iPhones — and indeed I did watch my traveling companion a couple weeks ago google “why won’t my Ford van start”; it did not return what we soon figured out was the answer: hold the shifter a half-inch above “P” with your left hand while turning the key with the right), it seems fair to conclude that the search engine fields myriad queries about glitches in our most prized and important machines.

And so isn’t it curious that just one of the top ten Google searches aimed to elucidate the causes of malfunctioning electronics regards anything other than an iPod,  iPhone or iTunes? I wonder.

What’s the message here? Does the preponderance of iTrouble-shooting reflect an under-appreciated under-performance of Apple products, or it it merely an underscoring of their overabundance? Put (slightly) differently, are there more problems with these devices than we realize or are willing to admit, or is it merely a numbers game: when the sheer volume is so high, even a reasonable percentage of problems will constitute an enormous quantity in absolute terms.

Let’s assume the latter is true. Should I/we be shocked that there are so many iProducts floating around out there, fucking up from time to time? Certainly not; we’ve seen the sales figures. The company sold 10.2 million  iPods and 7.4 million iPhones in the fourth quarter of 2009 alone. What’s really striking, rather, is how effectively they seem to be diverting our attention from all the other gadgets in our lives, which surely still fuck up on the regular. Where are the Google searches for “why won’t my DVD player play?” and “why won’t my smoke alarm stop beeping?” and “why won’t my Blackberry change time zones?” (For that matter, what about “why won’t my girlfriend shut up?” and “why won’t my love handles go away i do so many crunches and barely eat carbs what does god want from me?”)

By now you might be thinking “why won’t my favorite blogger in the whole world just come up with an answer already?” Well, I’m not sure. But I think it comes down to dependence, and my firm belief that technology is like a drug. You become addicted and can’t function on your own without it. Whether you once dutifully carried a walkman or discman with you at all times (as I did) and traded up to an iPod, or you never listened to music until the iPod became all the rage, now it’s a daily given, like coffee in the morning and a key-bump in the mid-afternoon, and when something gets in the way you absolutely must find a solution. There is no riding it out, there is no going without. Meanwhile other digital distractions have apparently be relegated to secondary status — DVDs and smoke alarms now weekend worries.

Oh, and of course, this also lends credence to my theory that Apple and Google are in a neck and neck race to take over the world. Them and the Chinese.