My bad for going to Comic-Con last Friday and not reporting directly back. Among the books, the toys, the frenzy of cos-play, the unease of Japanese girlfriend-painted body pillows, what probably impressed me the most was seeing the XBOX 360 Kinect in action. The video above isn’t exactly riveting, but gives you the idea: No controller, no peripherals, no nothin’. Didn’t try it myself, but it looked pretty far out. Oddly, perhaps, I particularly enjoyed watching players go through the menus at the beginning, waving their hands up and down and snatching at the air like conjurers with wallet chains.

My guess is that at least for now it’s as much about the cool factor as it is about effective, precision game-play. But give it time.

After the break, my ABSOLUTE FAVORITE shot from Comic-Con NYC 2K10. 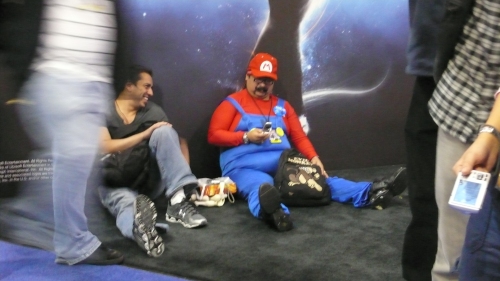